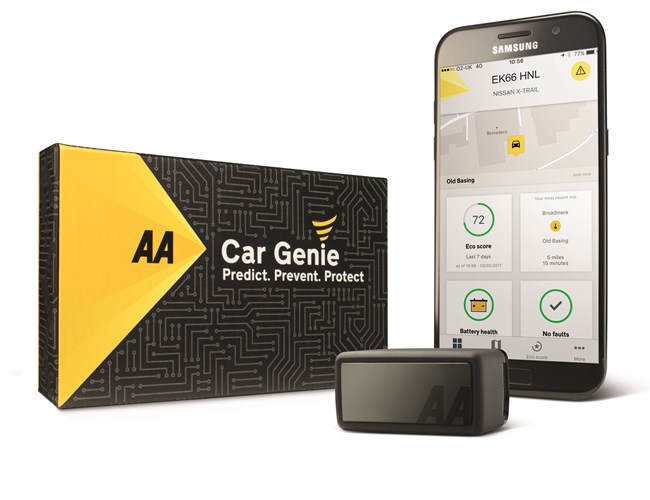 The AA’s new breakdown app, ‘Car Genie’ is due to be released to businesses and fleet managers later this year. Originally available to only private drivers, the app aspires to provide accurate maintenance and repair scheduling by allowing drivers to be proactive in their decision-making. Car Genie is able to report live on what’s happening beneath a vehicle’s bonnet, highlight faults and predict up to a third of breakdowns before they happen.

Whilst not the first app of its kind, Car Genie has undergone both extensive and rigorous testing. Having being used in over 10,000 vehicles, the app has access to a vast array of technical information for a variety of car models. As a result, it has a significantly greater chance of determining whether a fault code will entail a breakdown. The AA claims that the software is straightforward to install into a vehicle’s diagnostic port. From there, it’s able to analyse diagnostics in real time which is then presented via the mobile app. This is available on both iOS and Android.

Car Genie is also able to provide traditional telematics, including a driver’s behaviour when behind the wheel. Accurate telematics allows fleet managers to cut costs and improve the overall safety of their drivers. Jennie Hill, Business Services Director at the AA, said “Preventative maintenance systems are not new to the marketplace. However, we believe that what sets Car Genie apart is the rigorous product trials and testing we’ve undertaken to ensure the product is tailored to our business customers.” She continued “Car Genie takes a significant burden away from fleet managers and allows them to focus on other aspects of their role. Not every fault code requires a vehicle to be taken off the road immediately – indeed some just go away by themselves – and the system has been designed to only alert customers when the fault is dangerous or likely to cause a breakdown.”

The system will also allow fleets to present garages and repair centres with accurate fault codes, making sure that the problem is accurately diagnosed and, in theory, resolved more quickly. Roadside assistance features are also included, such as accident detection which is followed by the driver being prompted by a notification to contact the AA for a call-out. Significant faults can be detected by acknowledging changes in speed vs g-force, this allows the breakdown service to offer advice and support, helping the driver to continue on their journey safely. Car Genie will also monitor the health of a car’s battery, reporting when it’s low; this will no doubt be particularly useful in winter months.

The AA’s innovative app will cost £29.99 for an annual subscription and works with most cars made from 2005 on wards. Full details are expected closer to the app’s fleet release, due later this year.